Maltese Not At All Cross!

I'm heading to the lovely island of Malta for a few days for the International Association of Homes and Services for the Elderly 7th International Conference. They're blogging the conference, so if you want to know what we're up to, take a look!
Posted by Donna Butts at 2:01 PM No comments: 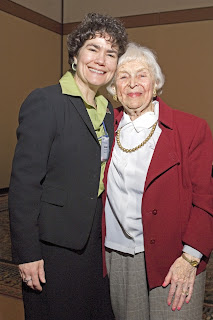 It is with great sadness that I share the news of the passing of Janet Sainer, one of our great friends. Janet died June 3 in Denver after being hospitalized during the Brookdale Relatives As Parents Program conference. Although her health had been precarious for some time, the death of such a vibrant, committed leader comes as a shock to us all. This picture, which I cherish, shows Janet and I at the ASA/NCOA conference earlier this year. Thanks to Paul Kleyman sending me a copy - it was taken by Bob Levy at the President's Reception. It's great to have such a special memory on film.

Janet's involvement in the intergenerational field began with her career as a social worker in New York in the early 1950s. She joined the Community Service Society of New York, where she began engaging seniors as resources, based on her hypothesis that many seniors would volunteer to do valuable service if given the opportunity. In 1965, Janet developed a program called Serve and Enrich Retirement by Volunteer Experience (SERVE). Recruiting volunteers for her program from nearby senior centers on Staten Island, NY, Janet began introducing older adults to people with developmental disabilities.

Janet's book, "SERVE" documented the success of her program and served as the platform on which she testified before Congress to get funding for paid staff to develop volunteer programs. SERVE grew into the Retired Senior Volunteer Program (RSVP) and Janet is often referred to as the grandmother of RSVP, which now exists in over 700 sites across the U.S.

Janet's work brought her to the attention of the Mayor. When Ed Koch was elected Mayor of New York City, he appointed Janet to serve as Commissioner of the New York City Department for the Aging, a position she held from 1978-1990. During her tenure, Janet was responsible for starting and expanding many critical programs and services for seniors. She established the New York City Alzheimer’s Resource Center, the first municipal center in the nation to provide free counseling and referral services for Alzheimer’s Disease patients and families, and initiated the annual Mayoral Conference on Alzheimer’s Disease, which continues to this day. She also created new linkages among the public, private, and voluntary sectors through the nationally known Citymeals-on-Wheels program, which provides additional meals for the elderly homebound on weekends and holidays. In addition, she developed the Stay-Well health promotion program, minority enhancement services, and a number of intergenerational programs.

Most recently, Janet was a Special Consultant to the Brookdale Foundation, a relationship which began during her years with the City. She focused primarily on the issue of grandparents and other relatives raising children.

Generations United has had the good fortune of partnering with Janet and Brookdale since the mid-nineties, when the issue of grandparents and other relatives raising children began to gain national attention. To the staff of GU, Janet has become more that just a partner, she has become a wonderful friend and part of the GU family. It has been an honor for all of us to work with such an amazing woman and pioneer in the intergenerational field.