This week's cool idea is Lifesongs, an intergenerational arts project in New Mexico that promotes social inclusion and dignity for elders and people in hospice care.

Lifesongs brings elders and people in hospice together with artists, youth, and other community members in creative exchange. Working one-on-one and in ensembles, participants develop original works that incorporate music, movement, and multimedia to explore the richness of all stages of life.

After many months of collaboration, the pieces are performed in a public concert by professional musicians, local choirs, and artists of all ages.

Through witnessing our elders’ songs and stories, we connect around what we share as opposed to what separates us, we bless and heal the past, and we hold our elders and the dying in their potential rather than their decline.

In addition to public performances and scalable concerts, Lifesongs provides free and public facilitated dialogues on death and dying with community partners. In 2015, Lifesongs launched the Story Gathering project.

The Story Gathering project brings youth, community members, and elders together to share stories and life experiences. Participants collaboratively shape stories into new works of writing and art to present to the wider community.

While deepening its roots in northern New Mexico, Lifesongs is carefully fostering and mentoring projects in other communities around the country.

Got something cool you tried that was successful? Share the inspiration. You can also post them to our Intergenerational Connections Facebook Group. We want to highlight innovative age-optimized programs and practices through our blog, social media and weekly e-newsletter!
Posted by Alan at 4:15 PM 1 comment:

EDITOR'S NOTE: #IGinspirations is a new series we started that features stories people have about their grandparents.

My Grandmother, who with my Grandfather took care of me much of my childhood, was badly injured in a car accident when I was in high school. She ended up in a convalescent home.

My Grandfather had already passed. I would go to visit her with my mother, but as most teenagers would, I hated going there. It was not a nice place and there was nothing to really do there.

Over the years, her eyesight and hearing failed and she began to suffer from dementia. So communication became increasingly difficult. I rarely went to see her....but I did go - alone - one day in my late 20s.

She didn't realize who I was. She thought I was the nurse's aide and proceeded to want to talk about her Granddaughter....me!

She told me how proud she was of her Granddaughter, how she had finished college and was now a successful radio personality. She talked about what a hard childhood I had had because of my stepfather and how she had felt bad for me and always tried to help.

It was amazing because I didn't know that, before dementia set in, she had actually been following my career.

She spoke for about 20 minutes. I worked very hard to keep her from realizing that I was crying. When she finally finished, I thanked her - still in the guise of the nurse's aide - for telling me about her wonderful Granddaughter.

She smiled and was quiet.

Passing the other bed in the room as I went to leave, the woman in it called me over. Quietly, she told me she had not meant to eavesdrop but had heard all that my Grandmother had said and asked if I was the Granddaughter.

She explained what a great gift I had just been given to know just how much my Grandmother loved and cared about me.

There are currently 10 garden plots tended by 10 groups of garden partners (made up of youth, seniors, and family members working together).

The idea blossomed when the town decided to place the Stoughton Youth Commission under the same roof at the Stoughton Council on Aging.

Got something cool you tried that was successful? Share the inspiration. You can also post them to our Intergenerational Connections Facebook Group. We want to highlight innovative age-optimized programs and practices through our blog, social media and weekly e-newsletter!
Posted by Alan at 11:49 AM 1 comment:

Every Child Needs a Family For the majority of children in the U.S. gifts and family may seem almost synonymous with the holidays. But for the more than 55,000 children and youth in the U.S. foster care system who are living in group homes, the gift of family feels largely out of reach. One in seven children under the care of the child welfare system is placed in a group setting, even though more than 40 percent of these children have no documented clinical or behavioral needs that warrant placing them in group settings without families.

Every child needs a family and research shows they do best when that family is headed by a grandparent or other relative. Compared to children in group care and those in foster care with non-relatives, children in foster care with grandparents or other relatives have more stable lives, better behavioral and mental health, and are less likely to run away. Perhaps most importantly, they are most likely to report they “always feel loved.”

But the child welfare system is not set up to provide the necessary outreach, supports and services grandparents and other relatives need when they step in to raise children.

Bob Ruble of California understands well the importance of supporting relatives to keep children with family and out of group care. Bob explains, “My sister had many life issues and had been making poor and unsafe decisions while raising her daughter, my niece. When my niece was 8, I made the call my sister was arrested. My niece was removed from her care and placed in group home care. I assumed I was done. The next day I got the call and was asked to have her placed with me. There was no one else who could and I was told if I said no then she would be placed with a stranger in foster care so I stepped in to care for her. My journey began and I was left with little direction on how to proceed on my own.”

Yet Bob was fortunate in many ways. He had a steady income and was able to handle the financial issues until additional resources were made available and he had the stamina to track down the elusive information and support he and his niece needed.

In contrast, of the 2.6 million grandparents responsible for grandchildren across the country, more than one in five lives below the poverty line. Twenty-six percent of them have a disability and are juggling their own health care needs in addition to the needs of the children. The vast majority do not have supports or do not know how to access the supports and services that are available to them.

In the midst of this holiday season, Congress has the opportunity to give the gift of a safe and loving family to children who cannot remain with their parents. Bipartisan legislation called the Family First Prevention Services Act passed the House of Representatives in June. The legislation would prioritize families for children and reform federal child welfare financing so that those funds could be used for supportive services to grandparents and other relatives to help keep children with them and out of foster care when possible. But the Senate left for recess in September without passing the bill. Even following a divisive and contentious election season, the importance of supporting families for children is something elected officials on both sides of the aisle can agree on. They simply need to make it a priority and get it done when they reconvene for a lame duck session in November.

And if they do, Bob, who has gone on to become a spokesperson and advocate for children being raised by relatives, will highlight for them what the gift of family can mean in the life of a child. Now age 22, Bob’s niece, Kindra, is attending Fullerton College and is pursuing a major in art and a minor in psychology. He is so proud of her and reports that she is an amazingly talented artist and an equally skilled writer. Lately, she has been talking with Bob about plans to write her story about how important it was for her to remain with family. When she shares it, she hopes it may help others this holiday season understand what family has meant to her. A true gift.
Posted by Alan at 12:04 PM No comments: 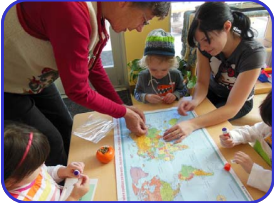 This week's cool idea is the Five & Fit program in California, which is based on a model from Temple University, older adults (age 55+) guide young pre-schoolers (ages 2 - 5) and their families toward improved nutrition and enhanced physical activity.

The mission of the program is to prevent childhood obesity and to promote healthy, active, life-long behaviors.

The program is a collaboration between Aging & Independence Services (the County of San Diego's Area Agency on Aging) and the Cuyamaca College Child Development Center.

Got something cool you tried that was successful? Share the inspiration. You can also post them to our Intergenerational Connections Facebook Group. We want to highlight innovative age-optimized programs and practices through our blog, social media and weekly e-newsletter!
Posted by Alan at 3:10 PM 1 comment: