In his State of the Union address this week, President Obama issued a strong appeal to lawmakers to move into a new era of cooperation. Echoing this sentiment, members of Congress sat side by side with colleagues from opposing parties, rather than their tradition of party divide on either aisle. In the same spirit, Congress and the president should join together to promote and preserve policies that serve children, youth and older adults mutually, because we're stronger together.


Obama addressed the fiscal challenges ahead and announced a 5-year freeze on domestic spending. But, he made clear his commitment to preserving protections to those who need it most my making sure we "are not doing on the backs of our most vulnerable citizens."


We applaud the president's challenge to find a bipartisan solution to strengthen Social Security, without putting at risk current retirees or people with disabilities and without slashing benefits for future generations. His call should not overlook the critical role Social Security also plays in the lives of 6.5 million children today that receive part of their family income from it.


Reiterating his commitment to education, the president noted in order to achieve innovation to produce jobs in America, then we must win the race to educate our children. We support early investments to provide every child with an opportunity to succeed.


The president's call for a review of government regulations presents an opportunity to reduce barriers and streamline efficiency. Not only will this facilitate better communication and partnerships between government agencies, it will create opportunities for the government to work together to identify ways in which communities can deliver critical services to all generations.


Finally, President Obama's openness to improvements in the Affordable Care Ace is laudable, as is his unwillingness to return to practices that allowed insurance companies to deny coverage to someone of any age because if a pre-existing condition. He affirmed making prescription drugs cheaper for senior citizens and giving uninsured students a chance to stay on their parents'coverage have been crucial facets of an important protection to families.

The president rightly declared "the future is ours to win." The path to that victory is paved with cooperation and intergenerational solutions to our nation's challenges. We urge Congress and the president to keep working together -- because we are stronger, together.

Rich Robinson is press secretary for Generations United. You can reach him directly at rrobinson@gu.org
Posted by Rich Robinson, Press Secretary at 5:37 PM No comments:

You need volunteers. You want people to give. You would like greater participation in your programs and services. To attract and engage participants, volunteers, donors and community supporters, intergenerational programs must effectively communicate their missions.

On January 20, Generations United hosted a Learning Network Webinar that featured presentations by Civic Ventures and Generations Incorporated. Using Civic Ventures encore career campaign as a case study, Michelle Hynes showed the Learning Network how to convey impact and value with personality, passion and commitment. She also walked the group through a strategic choice on the campaign's website, to shift away from organization-centric content to more dynamic and interactive engagement with their key audiences.

Mary Gunn and CT Ransdell showed participants how Generations Incorporated uses social media including Facebook, Twitter, YouTube, blogging and e-alerts to communicate their mission. Their organization recently raised almost $10,000 as part of a Facebook campaign in partnership with the Rodman Ride for Kids. CT gave helpful suggestions on how to make Facebook donation requests fresh and interesting for readers. Asked how many times a day he updates their Twitter feed, CT noted that he tweets for the organization five times a day following standard nonprofit technology best practice recommendations. Using an application like SocialOomph also helps him manage his time effectively by setting up tweets in advance.

Download a copy of the presentation (PDF, 1.5MB). Help Generations United continue the conversation in the comments section below. What does your intergenerational program do to communicate your mission? Do you use any interesting tools that could help other intergenerational programs? If you use social media, connect with us on Blogger, Facebook, Twitter and YouTube.

Anne Tria Wise is the Intergenerational Engagement Manager at Generations United. You can reach her directly at awise@gu.org
Posted by Rich Robinson, Press Secretary at 11:59 AM No comments: 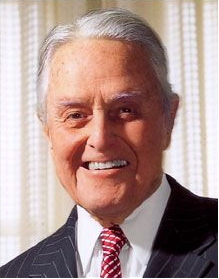 We pause to reflect on the loss of Sargent Shriver, the first director of the Peace Corps, service advocate, and leader of the war on poverty, who passed away at the age of 95. During his career in public service he confronted a range of conflicts that pitted Americans against each other. Though for many in politics it was commonplace to fall in line with this frame of mind, Shriver focused on the betterment of all generations.

During John F. Kennedy’s presidency, Shriver served as the first Director of the Peace Corps—a roll which carried over into President Johnson’s term. In the Johnson Administration he created the Office of Economic Opportunity and served as its first Director. In this position, he created an initiative to tackle the War on Poverty in order to eliminate the economic and social roots of the conflict over civil rights in America. Like the Peace Corps, the programs of the War on Poverty - including Head Start, Job Corps, VISTA, Community Action Program, Legal Services to the Poor, and one of the longest running intergenerational programs in the country, Foster Grandparents - continue to serve Americans today.

President Obama remarked, “Over the course of his long and distinguished career, Sarge came to embody the idea of public service.” Sargent Shriver was an inspiring figure whose life reaffirms the role that government can play in producing positive, creative change for people of all generations. Shriver’s legacy should serve as a reminder to all of us that in order to combat political tension we must transform the roots of the conflict. As we continue to address our nation’s challenges, we should reflect on Sargent Shriver’s legacy and remember that together, through acts of service and sacrifice in our communities, we can improve the lives of all generations.

Image courtesy SargentShriver.org
Posted by Melissa at 1:02 PM No comments:

Email ThisBlogThis!Share to TwitterShare to FacebookShare to Pinterest
Labels: intergenerational

No On Health Care Repeal

In 2009 -- prior to the passage of health reform legislation -- 1.5 million Americans lost health coverage. The health care act is slated to increase the number of insured by 32 million and the newly insured span all generations. Families suffer when one of their members -- and any age-- can't access quality health care. And without the Affordable Care Act, medical crises will continue to push families into bankruptcy.

Posted by Rich Robinson, Press Secretary at 11:32 AM 1 comment:

When Tragedy Can Bring Us Together

Trying to make sense of a traumatic event is never easy. If anything can be gained from the tragic shooting in Arizona, we can hope it is the understanding that now more than ever, we need to join together as a nation and stop polarizing our communities.

The "Congress on Your Corner" event held by Congresswoman Gabrielle Giffords was intergenerational, attracting older constituents seeking to be heard on issues important to them, and by at least one youth who wanted to behold Democracy in action close up. The fact the killer's bullets were indiscriminate makes the incident no less horrific.

In times of tragedy people can be comforted by generations joining together and listening to each other. The young people can find answers to life's thorny questions when they discover the wisdom of their elders. And older people can find hope in a cynical world when they see virtue in the eyes of the young.

We need to acknowledge we are all citizens, one people in a nation comprised of many different ideas and goals. We must continually remind ourselves that hate can only divide us; that we are interdependent, and together we must face the challenges ahead. It's a family, not a fight.

On Tap For the 112th Congress

During the 111th Congress, we saw the passage of sweeping reforms in health care and consumer protections, which defend Americans from hidden fees, abusive terms and deceptive practices when obtaining credit cards and mortgages. However, the incoming congress will have a full slate of new issues to consider, which range from deficit reduction to education reform. Here are some issues that we anticipate the 112th Congress to address:

Elementary and Secondary Education Act (ESEA) Reauthorization. Education Secretary Aren Duncan express optimism that ESEA will be reauthorized this spring in a bipartisan fashion in his Washington Post Op-ed.

Deficit Reduction Negotiations. The co-chairmen of the President's fiscal Commission have requested the White House and congress begin negotiations to develop a plan for deficit reduction which could negatively impact Social Security.

Older Americans Act Reauthorization. The OAA's reauthorization is vitally important to older adults as it accounts for food, employment and training programs for seniors.

Passage of an Omnibus Spending Bill. The 111th Congress adjourned in December without passing an omnibus spending bill, leaving the task for the incoming congress to tackle. Among the items to be funded in the bill: ACA implementation, Lifetime Respite Care, and the National Caregiver Support Program.

What You Can Do Now: In 2011, we face many challenges in funding critical services for all generations. Now is the time to create and implement policies that help generations help each other, thereby strengthening our economy. Help us grow the voice of intergenerational investments to make sure congress doesn't pit generations against each other. Sign up 5 friends to follow Generations United Policy Alerts to stay up to date on the latest policy news from Washington, DC. It's not a fight, it's a family.
Posted by Rich Robinson, Press Secretary at 5:29 PM No comments: