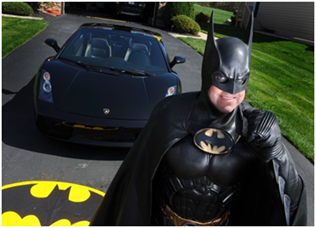 Lenny B Robinson of Baltimore County, MD is just like you or I. He has a normal day job, a loving family, and unfortunately may occasionally get pulled over while out driving. The thing is, when you or I get pulled over it doesn’t usually make headline news.

You might have already heard about Lenny last week and not even known it; Robinson was the mysterious man who lit up the national media after a run in with Montgomery county police officers in which he was stopped while driving a black Lamborghini and wearing a fully functional $5000 Batman costume.

Robinson isn’t some over-indulgent comic book fan who just wanted to show off on the road, though. He’s a 48 year old self-made businessman who spends considerable time and money every month to give back to his community. Since 2001 Maryland’s very own caped crusader had been visiting area hospitals to talk with sick children and hand out Batman toys, and speaking to students at local schools about bullying.

While spending time at a DC children’s hospital Robinson makes a deliberate effort to give his full attention to every child he meets. He offers them words of strength and the support of someone who is to them larger than life. Before he leaves at the end of the day Robinson makes sure that there weren’t any children who were unable to come out of their rooms to see him. For many of these kids who have been stuck in the hospital for weeks or months, a visit from Batman can turn another difficult day into one of hope and excitement.

It isn’t the mask that makes Robinson special; it’s the man underneath it. Anyone can go buy a costume and pretend to be a superhero, but it takes so much more to do what Robinson does.

It takes a real hero. To read the full story on Mr. Robinson and the amazing work he does, check out this fantastic article from the Washington Post: http://ow.ly/9XN5m

Posted by Donna Butts at 4:48 PM No comments:

Email ThisBlogThis!Share to TwitterShare to FacebookShare to Pinterest
Labels: Stories

Yesterday, Congressman Paul Ryan presented his latest “Pathway to Prosperity” budget. After examining the document, Generations United was deeply troubled by many of the proposals contained in it because they would significantly reduce funding to the critical social safety net for America’s most vulnerable children, youth and older adults. Here is our analysis of the Ryan budget.

If enacted, Ryan’s plan would convert the Supplemental Nutrition Assistance Program (SNAP) into a block grant. In the long term, this would harm tens of millions of children, families, and older adults who rely on this critical safety net program. Hunger, food insecurity, and poverty are significant problems affecting millions of people in the U.S. and are expected to persist at high levels due to the weakened economy.

Additionally, the Ryan budget proposes to restructure Pell grants by “limiting the growth of financial aid and focusing it on low-income students.” Without specific language, it is hard to gauge the full impact of this proposal. When combined with additional budget cuts, this would surely limit access to this critical program that serves nearly 10 million college students.

Proposed changes to essential health programs are even more concerning. The Ryan budget calls for repealing the Affordable Care Act (ACA). The act provides critical health benefits to an estimated 19 million children and older adults by 2019 and includes provisions that would save $418 billion in Medicare costs over 10 years. In place of the ACA, the Ryan budget proposes that employers provide a cash supplement for their employees to purchase health care on the open market. That proposal ignores the troubling question of how our nation’s most vulnerable, including the unemployed or underemployed, will access health care.

The budget also proposes to convert Medicaid to a block grant, shifting the costs and risks to states, providers, and beneficiaries. With state budgets already overstretched, that move could jeopardize access to critical health services and put states in the difficult position of choosing between providing health care coverage for children's doctor visits or long-term care for older adults.

While ensuring existing Medicare benefits for those over 55, the Ryan budget would provide an unspecified amount of money directly to younger workers and require them to buy their own coverage in a way that may not guarantee the same coverage seniors have come to trust from Medicare. While Generations United believes the nation must address Medicare spending, this proposal sets up the potential for younger workers to not receive the care they need when they age.

To balance the budget and reduce the deficit, the Ryan budget proposes measures that would dramatically slash spending and place children, youth and older adults at risk. These measures include relying on six separate committees to recommend cuts. These cuts would be directed at domestic spending including nutrition, Medicare, and Medicaid. Additionally, the Ryan budget would require caps on both discretionary and mandatory spending, beyond what was agreed to in the final budget agreement reached in fall 2011. Any increases to mandatory spending would require Congress to reduce other spending to pay for the increases and to “review mandatory spending programs” regularly. This sets up a dangerous situation where vital safety net services could be cut to pay for needed increases in mandatory spending. Generations United opposes any deficit reduction plan that puts the burden of cuts on the backs of the most vulnerable Americans. We must ensure that budget reduction is done in a responsible manner that truly reflects shared sacrifice, without disproportionately burdening the most vulnerable.

We at Generations United strongly support investing in our country’s economy and people. These investments include creating opportunities for vulnerable people to overcome hunger and poverty, extending the rights of today’s youth to continue their education through college, and for today’s older adults to receive affordable care on a fixed income. These investments are needed more than ever in today’s economy. If we fail to support them, we fail our commitment to the generations before and after us. The true path to prosperity is through strengthening our safety net and investing in our country; not by cutting critical supports to Americans in need and balancing the budget on the backs of the most vulnerable.

The Generations United staff kicked off our St. Patrick’s Day celebrating a little early this year by holding the first ever intergenerational office door decorating contest. The rules: decorate a door with a St. Patty’s Day theme. The results: four entries that brought out the creative talents of our staff!

Can you match the Generations United staff with the correct door? Leave your guess in the comments and check back on Monday for the big reveal.

On behalf of all of us at Generations United, we wish you a Happy St. Patrick’s Day!

Thanks to our esteemed judging panel, we can announce the results of the St. Patrick's Day door decorating contest!

Best use of the color green: Melissa (Door #3)

Thanks to all the staff that participated!

Did you know that March is National Nutrition Month? This month, Generations United wanted to highlight some facts and resources for the millions of Americans struggling with hunger today.

According to AARP Foundation’s Food Insecurity among Older Adults, nearly nine million low-income seniors 50 and older are food insecure. Among that number are nearly one million grandparent caregivers, who are especially at risk of food insecurity because they have taken on the enormous responsibility of caring for their grandchildren. In addition, Share our Strength notes that more than 16 million children in America are at-risk of hunger.

A struggling economy has left many families living in poverty and having to choose between paying the mortgage and buying groceries. A number of programs and resources are available for families in need of nutritious meals.

· Child and Adult Care Food Program (CACFP) pays for nutritious meals and snacks for eligible children who are enrolled at participating child care centers, family child care homes, and after-school programs, and for older adults enrolled at adult day centers.  CACFP meals give children and adults the nutrition they need as a routine part of their day care program.

· Home-Delivered Meals and Congregate Meals. These programs provide meals and other nutrition services to older individuals in a variety of settings, such as senior centers, or by home delivery for the homebound.

· Supplemental Nutrition Program for Women, Infants and Children (WIC) provides nutritious foods, nutrition education, and referrals for health care and social services to low-income pregnant, postpartum, and breastfeeding women, as well as infants and children (up to age five) who are at nutritional risk.

· The Emergency Food Assistance Program (TEFAP) provides emergency food and nutrition assistance at no cost and is usually offered at local food pantries and soup kitchens.

These programs all help to give children, youth, and older adults the nutritious food they need to enrich growth and development and to maintain physical and mental health. This March, we encourage you to call your Members of Congress and ask them to make hunger a priority, because no one should go hungry.

Posted by Anonymous at 3:42 PM No comments:

Email ThisBlogThis!Share to TwitterShare to FacebookShare to Pinterest
Labels: nutrition

The Story of Svante Myrick

Brian Williams started the beginning of this NBC Rock Center story as follows: “The beginning of this story sounds familiar to us all. A biracial man with an exotic name, raised by his single white mother and his maternal grandparents, who overcomes lean times in his life. He is accepted and attends an Ivy League school, later runs for public office and wins. Though this may sound like the story of President Barack Obama, it is not. This is the story of Mayor Svante Myrick of Ithaca, NY.”

Mayor Svante Myrick is 24, the youngest mayor ever in Ithaca. In an age of skepticism and doubt for all things political, how did this young man come to be mayor? The people of Ithaca will tell you it was his life story that inspired them.  From a young age, Myrick experienced homelessness and poverty living with his mother and father. During this time, his father was battling a serious drug addiction that ended up tearing the family apart. Seeing the struggles Myrick and his siblings were enduring, his maternal grandparents stepped in to help, offering them a home in upstate New York. These generous grandparents worked alongside their daughter to provide her children the comfort and security necessary for them to succeed.

Growing up in a family that was just scraping by helped shaped Myrick’s political views. He counts food stamps and school lunch programs as two critical safety net programs that helped his family during tough times. “I know personally I would not be here were it not for these programs.”  Myrick and his siblings all worked afterschool jobs to help pool money together to keep the family afloat.

When he was in high school, Myrick’s grandmother gave him a copy of Barack Obama’s book, Dreams from my Father. Being raised under similar circumstances, he saw himself in that story. But it was someone closer by who helped him to think about his future: his high school teacher, Jonathan Sherry. That teacher saw Myrick’s potential, and pushed his young student to strive for greatness. As a result, Myrick was accepted and graduated from Cornell University.

Today, Myrick sits in his office and faces the challenges and duties that every mayor must take on: a struggling economy, shrinking budget, and tough choices.  At a time when government programs are being drastically cut, Myrick sees value in strengthening the safety net programs that worked for him and his family.  “This is not the story of a self-made man.  This is the story of a community that conspired together to raise a child.”

Posted by Anonymous at 11:25 AM No comments: