As the Fiscal Commission is considering recommending to President Obama that Congress cut Social Security benefits, a diverse group of organizations – including Generations United - launched a major new campaign today to push back and demand that Congress not make any benefit cuts. New polling shows massive public support for members of Congress who support strengthening, not cutting, Social Security.

More than 60 national and state organizations, representing more than 30 million Americans, have joined the campaign, which will remind elected officials that Social Security remains the “third rail” of American politics and that any sort of benefit cuts are opposed by wide majorities, from liberals to Tea Partiers. At today’s press conference, participants outlined their plans to hold members of Congress who try to cut Social Security benefits accountable.

Social Security provides vital financial security, not only to our nation's retirees, but also to children and families through Survivors, Retirement, Disability and Supplemental Security Insurance benefits. It protects 98 percent of all children in the event of death or disability of a caregiver. Read more in our latest fact sheet.

For more on the campaign, visit http://strengthensocialsecurity.org/

For more on the polling, visit http://strengthensocialsecurity.org/sites/default/files/LakeMemoPublicFINAL6-29-10.pdf
Posted by Carol Scott at 5:18 PM No comments:

Here at Generations United, we are sad to recognize the passing of groundbreaking journalist Daniel Schorr, 93, in Washington. Along with having an impressive resume and an impeccable reputation, Daniel was the keynote speaker at our first Generations United conference, stepping in when his wife, Lisbeth Schorr, was unable to attend. We are lucky to have known and worked with Daniel, and send our condolences to his family.
Posted by Carol Scott at 3:32 PM 1 comment: 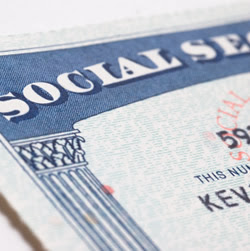 This recent Letter to the Editor in the Washington Post is a textbook example of the false either-or perspective that produces bad policy decisions.

John Schappi, 81, writes that he "would not be particularly happy to have to pay more in taxes or get less in Social Security and Medicare. But I could accept this if it meant repackaging government assistance so that my two children, three grandchildren and one great-grandchild have a better shot at achieving the financial security that I have."

Mr. Schappi's offer to sacrifice on behalf of children is generous and well-intentioned. However, cutting back Social Security -- which supports all generations -- would actually weaken protections and future benefits for children. Slashing benefits for survivors, children and adults with disabilities, grandparents raising grandchildren and others for whom Social Security prevents a slide into poverty will hurt families. And cutting back a federal program that aids seniors won't necessarily mean an increase for children. The perception that youth and older adults are in competition for limited resources is false. Children, and seniors, don't exist in a vacuum. They exist in interdependent families.
Posted by Carol Scott at 10:06 AM No comments: 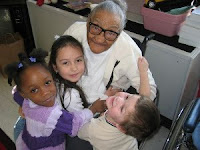 "When I was 14, my dad passed away. I was a freshman in high school. Social Security Survivors Benefits helped us with bills, food, our house, and my education."
-Maureen Sullivan, Wilmington, DE
Social Security benefits children. Six and a half million children in the United States receive part of their family income from Social Security.

Despite the unparalleled success of Social Security as a children's program, some lawmakers and pundits are arguing for cuts to Social Security in the name of children and grandchildren. In reality, slashing Social Security would hurt economic security for children everywhere.

Please spread this through your networks. If you have questions about the fact sheet, email Senior Public Policy Analyst Terence Kane at tkane@gu.org.

We have also developed a list of simple ways for you and your organization to help with the strategic circulation of up-to-date information on the Social Security debate. Complete this quick form (PDF) and return to mness@gu.org by July 30th, 2010 to raise awareness about the importance of Social Security for children and families.

We are saddened by the loss of Dr. Robert N. Butler – Bob to his friends – who passed away Sunday in New York after a battle with leukemia. Bob was 83. He was a pioneer in the field of aging and a lifelong proponent of intergenerational connections.

We’re privileged to have worked with Bob, who was proud to tell us and others that he was raised by his grandparents. He knew the danger of using age as a dividing line and worked to educate others on the interdependency of the generations and of the importance of supporting both children and older adults in public policy. He wrote about this when he mentioned Generations United in his 2008 book, The Longevity Revolution.

In June Bob invited me to speak to the journalists assembled for his International Longevity Center’s Age Boom Academy. I’d done this several times over the years and always enjoyed the informal exchange of ideas and Bob’s challenging questions. He mentioned again a study he thought we should work on together to update the picture of investments in the old and young. He believed some advocates were presenting an inaccurate account of how many of our federal, state and local dollars were going to each generation. While Bob didn’t want to spark a zero sum debate, he did think we needed a realistic portrayal of investments across ages. We didn’t get to finish this conversation but I hope in some small way, the work we are engaged in at Generations United will honor Bob and lead to a healthier discussion and understanding of the commitment between and among generations.

Our thoughts go out to Bob’s family, his colleagues and friends. He may be gone but his influence on the field of aging will be felt for generations.
Posted by Donna Butts at 5:28 PM 3 comments:

It's not often that you come across someone as energetic, knowledgeable and charismatic as Tom Taylor, Generations United's Special Advisor for Seniors4Kids. Tom, 83, has spent his entire career helping children succeed. Watch this video by Medill News Service reporter Camille Doty that profiles Tom and talks about his work with us.

From the National Center on Grandfamilies: Grandparents in the FMLA

On June 22, The U.S. Department of Labor, Wage and Hour Division issued an Administrator’s Interpretation clarifying that the definition of “son or daughter” in the Family and Medical Leave Act (FMLA) includes grandparents and other relatives raising children without any type of legal relationship to the children, both same sex partners raising children and other non-traditional families.

What is the FMLA?

Since its passage in 1993, the FMLA allows eligible employees in businesses of a certain size to take up to 12 weeks of unpaid leave in a 12-month period due to:

Where do grandfamilies fit in?

This Interpretation clarifies that the status of in loco parentis, or acting “in the place of a parent,” includes grandparents and other relatives raising children, and cites legislative history to show that this has been the case since the law’s passage. It also clarifies that the FMLA does not restrict the number of parents a child may have. A child may even have biological or adoptive parents living in the same home, and a grandparent, aunt or uncle may be acting “in loco parentis” and take unpaid leave.

We are encouraged by this Interpretation. As with many federal laws, states, employers, localities, and others often misinterpret the laws and impose additional requirements on families trying to access services or programs. We hope this is the first of many generated by the Executive Branch to clarify laws for grandfamilies, such as the definitions of (1) “familial status” under the Fair Housing Act, so its protections are not limited to those families with a legal relationship like legal custody; and (2) “in loco parentis” in the Individuals with Disabilities Act, so that some school districts do not require relative caregivers of children to go through the extra hurdle of becoming a “surrogate parent” for purposes of participating in the Individualized Education Plan (IEP) process.

This post is from Ana Beltran, JD, Generations United Special Advisor for the National Center on Grandfamilies.

Posted by Carol Scott at 9:03 AM No comments: