On the day of Congressman Paul Ryan’s birth in 1970, President Richard Nixon unveiled a federal budget proposal that included a large increase in Social Security payments. As a teenager, Social Security would later play an important role in the personal life of Representative Ryan (R-WI).

At the age of 16, Ryan’s father died unexpectedly from a heart attack. The death left the 10th grader, his three older siblings, and his mother alone.

The loss brought other changes to their lives. His mother returned to school to study interior design and the two became closer. “It was just the two of us,” Ryan says, “because my siblings were off to college.” Shortly thereafter, his maternal grandmother moved into their home while suffering from Alzheimer’s disease and Ryan would often provide care for her. “I did a lot of growing up pretty fast then… It gave me a pretty cold, quick lesson which was that life was short, so make the best of it.”

“His sense of responsibility hit him hard,” his mother Betty aid. “I think he felt he was the man of the house.”

Fortunately, Congressman Ryan could count on receiving Social Security survivor benefits. He collected payments Until the age of 18, putting the money away for college. Using the Social Security checks he saved, Ryan enrolled in Miami University in Oxford, Ohio. As a student, he became an intern for Wisconsin Senator Bob Kasten. Once he graduated with a degree in economics and political science, he joined Kasten’s staff and began his career in public service.

“My biggest motivation was to make my dad proud of me,” said Ryan.

Elected to office in 1998 at the age of 28, Ryan credits his father’s death and the care of his grandmother as giving him first-hand experience as to how social service programs work.

Posted by Anonymous at 9:12 AM No comments:

Announcing the 2012 Programs of Distinction

The wait is over and we are thrilled to reveal our newly designated Programs of Distinction! This year, six intergenerational programs from across the country qualified for Generations United’s “seal of approval.” They join the ranks of seven other programs designated over the last two years and are excellent, diverse examples of how intergenerational programs are making their mark.

Our 2012 Programs of Distinction are: 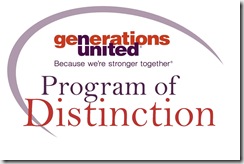 · Kendal at Oberlin’s Together Transforming the Experience of Aging, Oberlin, OH

Want to learn more? Stay tuned to our weekly newsletter, Generations This Week, for profiles on each of the six programs. (Not receiving GTW? Sign up here.) Do you want your intergenerational program to be on our list? Anyone can apply and we accept applications all year! Find out more on our Programs of Distinction page. Congratulations to the Generations United Programs of Distinction for 2012!